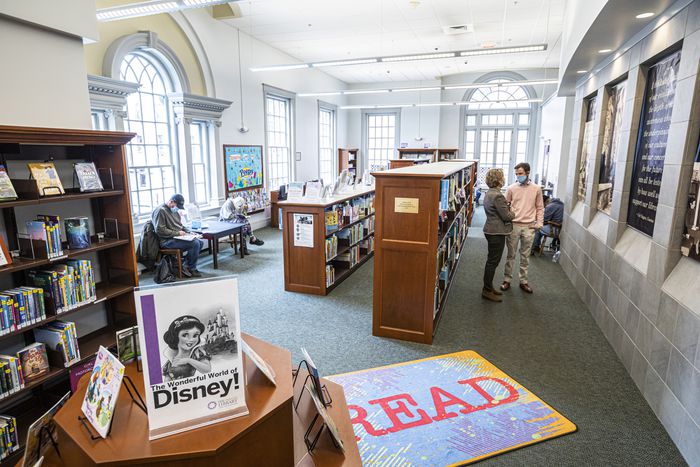 Harrisburg’s downtown library will be getting a lot bigger soon.
The Dauphin County Library System has kicked off a $3.5 million fundraising campaign that includes an expansion of the 107-year-old McCormick Riverfront Library in Harrisburg into an adjoining, historic property. The groundbreaking for the expansion is expected to take place in July and be completed in August 2022.

“We’re calling [the campaign] ‘Your Place to Belong’ because libraries build communities and communities build libraries,’’ Karen Cullings, the library’s executive director, said via a press release. “Every day, people are using our computers to look for work or advance their education, and families depend on us to help their children succeed in school.’’

“In 1896, Sara Haldeman Haly donated the money and the land next to her house to build a public library for Harrisburg, which grew into today’s public library system,’’ Cullings said. “This project brings Sara’s mission full circle.”

To help kick off the campaign for this massive project, Susan Orlean, author of “The Orchid Thief,” which was adapted into the Academy Award-winning movie “Adaptation,” is coming to the Whitaker Center in Harrisburg at 7 p.m. Saturday, May 8. While her appearance is invite-only, the public can see a free livestream of her talk. To register, go to dcls.org/SusanOrlean.

Orlean is also the author of “The Library Book,” which chronicles the 1986 fire that destroyed the Los Angeles Public Library, and it also tells the larger story of the importance of libraries to their communities. Orlean said in an interview on Tuesday that she never expected to become a spokesperson for libraries but since the book was published in 2018, she has taken part in a lot of fundraising campaigns for them.

“Supporting libraries and being part of a lot of campaigns, which turns out to be the case for me since the book came out, has really been gratifying,” Orlean said. “I feel really lucky. You write a book and you hope that people read it and respond to it. This is like an add-on to be able to continue participating in the world that I’ve written about and so there’s a lot of satisfaction that comes from that.”

The new space in particular will be an upgrade for children that visit the library. Currently, there is limited program space, no room for STREAM (Science, Technology, Reading, Engineering, Arts, and Mathematics) learning, no separation between adults and children, and no separate restrooms for children. The expansion will allow the library to restore approximately 2,150 square feet of space that will serve as a new children and family area.

The Sara Haldeman Haly mansion, which was built in 1812 at 27 N. Front St. was designed and built by Stephen Hills, the architect of the original Pennsylvania state capitol building. Gov. John Andrew Shulze (who served as governor Pennsylvania from 1823 to 1829), and other city and state notables lived at the mansion, according to the library.

Cullings noticed something interesting when she toured the mansion of Sara Haldeman Haly.

“When I went into the house to look through it we discovered that in two of the mantle pieces that they have little books actually built into the columns of the mantlepieces as part of the design, so it just felt like in some ways it was meant to be that we connected these structures, because of course it was also the home of the woman who left the original bequest that started the library and the library is built on what was her garden plot.”

The library system purchased the property in 2019 for $295,000. Most recently, the property was a law office.

The mansion has a large double parlor with views of the river, a small meeting room on the first floor and an office/reception area on the second floor. The mansion also has parking, outdoor space and a carriage house. An outdoor space will be adaptable for gatherings. Currently the library has a large expense for parking. The library hopes to have 10 parking spaces for its staff once the project is completed.

Library officials say that the current entryway is unwelcoming, and that accessibility for visitors and deliveries is minimal but they plan to change that. Library officials also note that the newly renovated library will be designed to bring in more natural light. And an elevator will connect all areas in both buildings, except for the Garrett space in the Haldeman Haly house.

And officials have prepared for a post-COVID-19 world with reconfigured space to support social distancing, improved air filtration through HVAC upgrades, touchless fixtures and easy-to-clean furnishings.

The library also has partnerships with the Dauphin County Department of Human Services, Capital Area Coalition on Homelessness, and Tri-County OIC and serves as a referral service for citizens in crisis. The reconfigured space in the McCormick Riverfront Library will offer private spaces so staff can offer confidential assistance to those in need.

As part of the project, the Library is paying particular attention to historic preservation. For example, it is receiving guidance from an expert provided by the Historic Harrisburg Association on restoring the 209-year-old Haldeman Haly House’s windows.

It is also focused on creating a welcoming environment for people of all races, backgrounds and ethnicities.

“Downtown Harrisburg is changing in many positive ways. Still, 44 percent of its children are in households below the poverty level,’’ Cullings said. “The demand for our services has never been greater or more diverse.’’

As part of the McCormick expansion, the new central entry space will be called the “T. Morris Chester Welcome Center,” named for a Black lawyer, correspondent, and soldier who led two African-American regiments to defend a potential attack on Harrisburg during the Gettysburg campaign.

“Above all, we want to make sure that all we do reflects the backgrounds and cultures of those in our community,’’ Cullings said. “The Library’s core mission is to promote understanding and equality through education.’’

All of the bookshelves in the middle of the library will be mobile and at a lower height when the project is completed, Cullings said.

The library is located at 101 Walnut St. and is one of eight libraries in the Dauphin County Library System.

The library will not close during construction, at least not for any extended period of time. Officials will partition the building and operate out of one side of it while the other side is under construction. It will continue to fundraise during that time. There have been some delays with fundraising because of the pandemic but the project itself is moving forward mostly on schedule, according to Cullings.

The fundraising campaign is being co-chaired by the former director of the Patriot-News Community Service Department, Susan Anthony, and Andrew Enders of Enders Insurance Associates.